The Second Half Begins with the Cardinals Crushing Robbie Ray

Pictures taken by and .jpg created by @cardinalsgifs.

Well, that article headline is what we want the newspaper headlines to be tomorrow, right? In 2018, the Cardinals won a game against Robbie Ray in which Yadier Molina (see cover art) and Jedd Gyorko hit back-to-back home runs off of Robbie Ray.

I'm going to let Statcast (again, an invaluable resource) tell the story of what Robbie Ray throws. In 2019, here are all of his pitches and percentages:

You can see that he really works that four-seamer hard and all over the zone. He throws the slider (from a lefty arm slot) low and away across the zone, rarely catching the zone, often missing it. He throws just enough in the zone to keep hitters honest on it. That curve is really thrown down in the zone quite well, but he's only in the 7th percentile in spin on that curve ball. Batters have really destroyed his sinker this year and he's basically abandoned it.

Let's break this down further. Robbie Ray will be facing a lineup largely full of right-handed hitters tonight. Edman will bat from the right side, so will Martinez, DeJong, Goldschmidt, Fowler, Wieters, and Bader. Matt Carpenter, batting 5th, will represent the only player batting from the left. 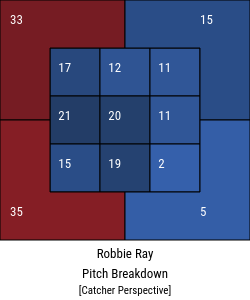 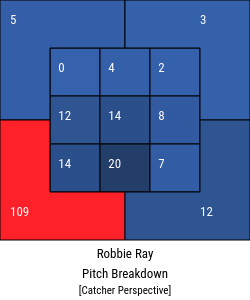 You can see that he attempts to work away with the four-seamer, so that the slider low and away can have a bit of bite to it and still look like the four-seamer.

Left-handed batters are only hitting .143 and slugging .245 on the slider this year, while they are batting .292 and slugging .479 against the four-seam fastball; attacking those fastballs that are in the zone are paramount to Carpenter tonight.

Carpenter cannot afford to roll over that fastball or slider, either. Left-handed batters have a .563 wOBA off of Ray when they go the other way with those outside pitches. Notice HOW MANY PITCHES are on the left side (catcher's view) of the strike zones shown to the left. It's astounding. Punish the fastball away, Matt. Just do it.

Back to the righties (ya know, the other 7 position players in the order...) - I want to show as much info as I can about those pitches in as little space as I can. So, with that in mind, here is the pitch, the batting average against, slugging against, wOBA against, average velocity, and percent of time thrown, all in once simple view.

Let's look at these pitches linked together first. The four-seam and the sinker just don't have a pronounced enough difference in speed or movement to make the sinker effective enough. He may try to pull a Chris Archer tonight and abandon the sinker altogether. He'd probably be wise to. 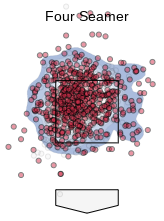 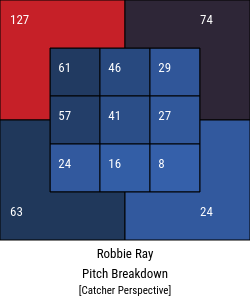 You can see by sheer numbers that Robbie Ray likes to come up and in with four-seam fastballs to right handed hitters. He also doesn't like to bring it into the zone unless he has to. He likes to peck the edges of the zone if he can.

The next images will be of the sinker, which you can tell is obviously thrown on the outside half of the plate nearly exclusively. 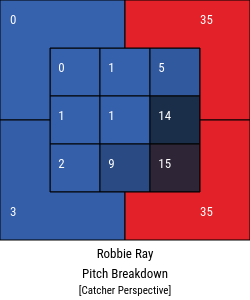 Those sinkers need to be pounced on at every opportunity. There is minimal difference in horizontal movement on those pitches, so if the right-handed hitters for the Cardinals can recognize that the fast pitches are going to be away, go ahead and look to pound them and pound them hard. Know that they'll have about 5 more inches of vertical break than the four-seam fastball, recognize the spin; because hitters have had nearly double the wOBA against the sinker this year! 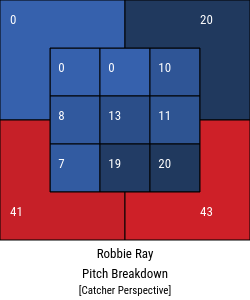 Onto the breaking pitches. The curve ball is thrown a lot more to right-handed hitters than lefties. Remember how it was basically non-existent to lefties, like the sinker was? Well, Ray really does a good job for the most part of keeping this pitch down to right-handed batters. However, with the little spin on it (he's in the 7th percentile in the league for pitchers that throw a curve), players hit it hard. In fact, while their wOBA against the curve is "only" .350, the xwOBA against the pitch is actually higher than that of the sinker. Batters have an EV on the curve of over 90 mph on the year. Attack the curve when you see it, know it is coming in low. Don't chase, get one you can handle. Look at the wOBAs on the curve ball when broken up by field hit to:

Don't try to sit back and poke that curve up the middle - if you can get around on it, you're going to crush it. If you recognize it away, crush it away. 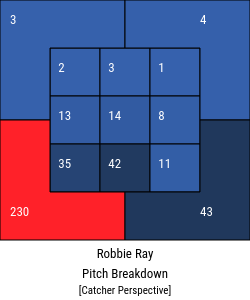 Lastly, he throws a ton of sliders to right-handed batters as well. The key if you're a right-hander is to lay off of it. 230 of the 409 sliders (56.2%) he has thrown have been low and in to a righty. An additional 10.5% have been below the strike zone away. An additional 18.8% of those pitches are low or low and in to a right-handed batter. These are tough pitches to hit. If you can lay off of the slider against Robbie Ray tonight, attack the four-seamers up high and any sinkers and curve balls that you see, you could very well put up a huge number against Ray in the hits column and thus (hopefully) the runs column.

I'm outta time. Hope you get/got to read this before the game and that all game long you were talking about that prophetic idiot over in Kansas City that you have seen on Birds On The Black. Please don't jinx anything. Go Cards! Get back to those April winning ways!

(Statcast and Cardinalsgifs are the best!)

What Do We Know About The Youngsters?

Pitch Movement - Does Maddux have an effect in this arena as well?