Sometimes it's simple, but that doesn't mean it's easy.

As we’ve concluded the first third of the season, the Cardinals sit at 6 games over .500 but are in third place behind the Brewers and Cubs. It hasn’t been a bad start to the season but it seems unfulfilling due to missed opportunities. At present, the team is being kept afloat by its starting pitchers because the offense and the bullpen have been underwhelming, to say the least.

I was probably in the minority, but entering the season I thought the bullpen would end up being a strength, and that was before it added Greg Holland. John Mozeliak brought in some new guys like Dominic Leone, Bud Norris, and Luke Gregerson and the team returned John Brebbia, Brett Cecil, Sam Tuivailala, and Tyler Lyons. There weren’t a lot of obvious stars but it seemed like there were a lot of quality arms (especially when you add in the young guys like Jordan Hicks from the minors) and the team could sort of “mix and match” into a successful bullpen rotation. Needless to say, it hasn’t worked out that way. One of the main culprits has been Tyler Lyons.

I was always a big fan of Lyons and, even when the Cards were giving him a chance to start, I thought he could make for a really good reliever. In 2017 Lyons really seemed to come into his own and I thought this year he could take it to the next level. To state the obvious, he hasn’t.

My first concern was that maybe he was hurt so the first data I looked at was his velocity. Fortunately, his velocity this season is in the same neighborhood as his velocity last season for all his pitches. The next step was to look at his plate discipline numbers and, unlike the velocity numbers, those have changed from 2017. The most notable element of that is that his O-swing rate is way down and his Z-swing rate is way up. Obviously, this means that batters are swinging much less often at pitches out of the zone and much more often at pitches in the zone. No wonder his HR rate and his ERA are way up from last season.

The question of course, is why are batters now swinging at pitches in the zone and taking pitches out of the zone? He’s actually been in the zone more often in 2018 than in 2017 and has a lower walk rate than in 2017. But even though he seems to have done a better job at throwing strikes (or at least being in the strike zone) than he did last season, batters have been able to tee off on him. The numbers below help to illustrate some of the problems Lyons has had. (4s wOBA is wOBA on Lyons’ 4 seam fastball. SI wOBA is sinker wOBA and SL wOBA is wOBA on Lyons’ sinker, his best pitch.)

Clearly now everything that Lyons throws is being hit much harder in the first third of 2018 than they were in 2017, despite the fact that the velocities on those pitches are about the same as they were last season? So what gives?

One other difference between 2017 and 2018 is that Lyons’ 1st pitch strike percentage is way down from 2017. Even though he’s been in the zone about 4% more often in 2018 than in 2017, he’s actually thrown 5% fewer strikes this year than last. As you see from the numbers below, that’s had a huge impact on what’s been going on so far this season. 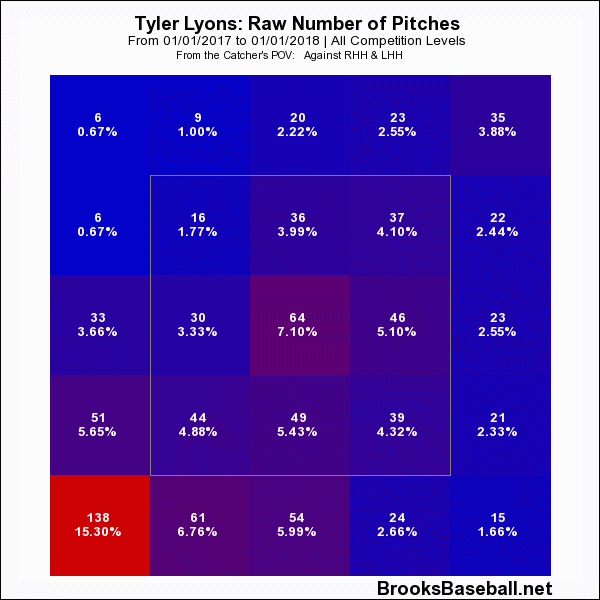 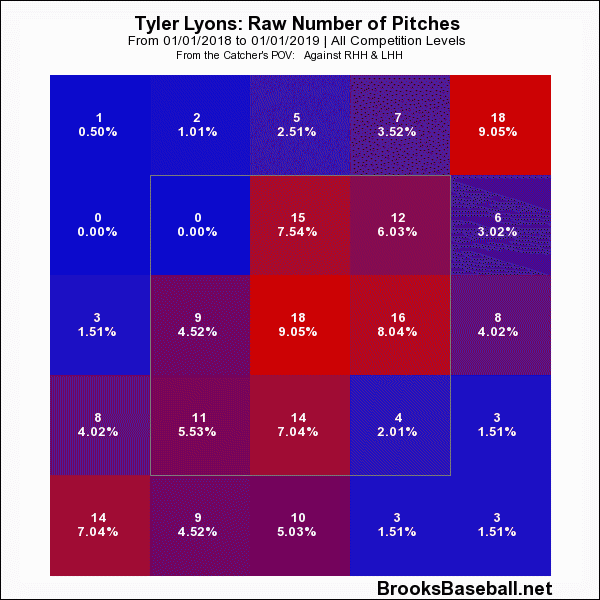 You’ll notice that the 2017 heat map is a lot more blue but has more purple at the bottom of the zone and below. The very red section in the bottom left hand corner shows where Lyons was able to throw his slider to get outs after getting ahead in the count. This helps to explain a 31% K rate in 2017.

The 2018 heat map is completely different with lots of red in the middle and upper parts of the zone. There’s still that red section in the bottom left hand corner but notice that only 7.4% of Lyons’ pitches have been in that section in 2018 compared to 15.3% in 2017.

It’s pretty simple, really. Lyons has had a terrible time trying to pitch in the bottom of the zone in 2018. Instead he’s getting behind in counts more often and then leaving pitches in the middle of the zone to be brutalized. Last year it was the opposite. He was ahead in counts and then able to use his slider, his best pitch, as a putaway pitch. Now, he’s having to throw his slider in the zone and hitters are feasting.

Lyons isn’t the only villain in the sordid story that describes the Cardinals’ bullpen in the first 2 months of this season but he is a guy who many (including yours truly) were counting on to help the pen be very good. Last year he showed that he can be a guy that can be used for an inning or more and to get both lefties and righties out. This year he’s been the opposite and it all boils down, as it often does with pitchers, to control and command. Once he’s able to start getting his fastballs and slider down, there’s no reason he can’t become as good as he was last year. Unfortunately, if it was actually that easy to do, he’d have already done it by now.

Thanks to fangraphs, baseball savant, baseball-reference, and brooks baseball for all the data today and thanks to everyone for reading.

We should have seen this coming

An early look at the 2019 schedule